Over in South Africa, where the featured video was filmed, the best-selling pickup truck is the good ol’ Hilux. Last year when nobody – not even the automotive sector – could escape the consequences of the health crisis, Toyota sold 31,263 examples. Care to guess which came in second place?
8 photos

That would be the Ford Ranger, which moved 18,846 units in the southernmost country in the African continent. The Blue Oval-badged truck in the drag-racing video comes in the guise of the XLT with the single-turbo 2.0L diesel engine, 10-speed automatic transmission, four-wheel drive, and FX4 decals on the sides. Not to be confused with the off-road package offered in the United States, this fellow is equipped with an electronic diff lock as standard while 4x4 models boast shift-on-the-fly engagement.

The 2.4 GD-6 4x4 Raider AT takes its mojo from a four-cylinder turbo diesel that flaunts 148 horsepower (150 PS) and 295 pound-feet (400 Nm) of torque from 1,600 revolutions per minute. These numbers may not impress you in the least, but do remember that lower output and larger displacement make the 2GD-FTV a far less stressed engine than Ford’s EcoBlue lump.

Priced from 627,900 rands ($41,275) at the moment of the drag race, the Hilux in this configuration also features a more traditional automatic transmission with six forward ratios. You may have already guessed which is the quicker pickup in a straight line, and you’re not wrong. The Ranger doesn’t accelerate as fast off the starting line, but higher torque and 10 forward ratios make the difference. According to South Africa’s CAR Magazine, the Ranger crossed the finish line by two-and-a-half lengths. 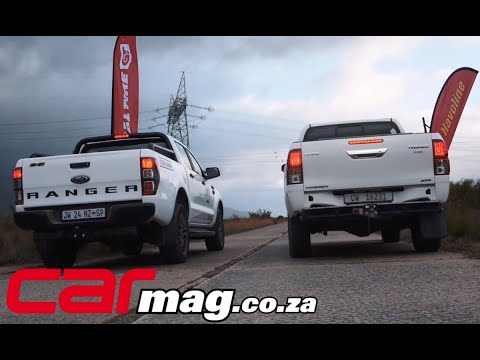