Unveiled in 2021, the Tesla Model S Plaid was the world's fastest production car on the quarter-mile for a short while, until the Rimac Nevera broke cover. Capable of covering the distance in 9.23 seconds, the Plaid is now the second-fastest production model at the drag strip, which is nothing to sneeze at.
6 photos

The all-electric four-door is quicker than an impressive lineup of gasoline-powered supercars, including the Bugatti Chiron, McLaren 765LT, and the Porsche 911 Turbo S. The fact that it's also faster than the Dodge Challenger SRT Demon, a drag-spec production car, is even more intriguing.

But as incredible as the Model S Plaid is when pitted against other production models at the drag strip, the truth is it doesn't have what it takes to go against full-fledged dragsters. And that's perfectly fine since it wasn't designed to win drag racing events.

Don't let the massive, gold-painted wheels fool you. This fourth-gen Monte Carlo hides a turbocharged V8 under the hood. Running on 30 PSI of boost, in cranks out well above 1,000 horsepower and runs quarter- and 1/8-mile sprints like it's nobody's business. Recent victims include tuned Porsche 911s and a pack of Dodge Challenger Demons and Hellcats.

The Model S Plaid lining up against this 1980s monster isn't exactly stock either, but we don't know what sort of extras it hides under the skin. But on top of that chameleon wrap and the parachute attached to the rear end, it rides on drag-spec wheels, so it should be quicker than its factory siblings even if the drivetrain is unaltered.

Whatever the case, it's not quick enough to outrun "Black Blur" in this race. Not only is the Monte Carlo off to a great start thanks to a near-perfect reaction time, but the EV's instant torque isn't enough to reduce the gap toward the finish line. Being a grudge race, there's no timing, but I'm pretty sure the Monte Carlo covered the distance in about eight seconds. The Plaid seems to be almost a full second slower to the trap.

Check it out in the video below. The action starts at the six-minute mark and you get two angles. There's a third angle from the starting line in the second video. 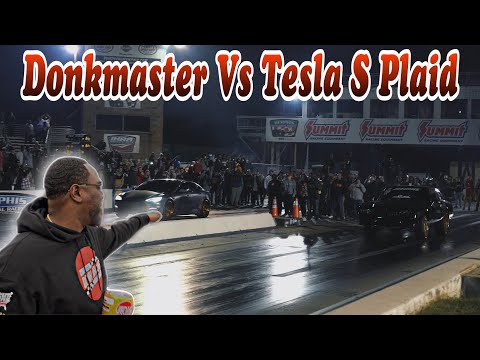 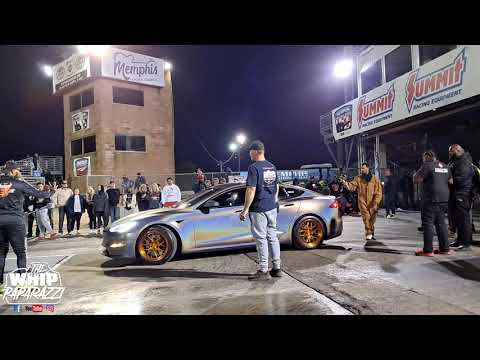