3 Ferrari Simoom SUV Rendering Is the Purosangue We All Wanted, but Will Never Get

Is Ferrari Finally Testing a Hybrid Option of the Purosangue SUV?

Ferrari tried to steer clear of the high-riding segments for as long as it could, but since this is where the money is these days, they have embraced the idea of having an SUV in their portfolio.
6 photos

We may think like we know much about it, but the truth is that we don’t. In fact, no one outside the Maranello company really does, because starting with its alleged name, the Purosangue, which has yet to be confirmed, and ending with the powertrain lineup, these are all well-preserved secrets.

The Prancing Horse has used modified bodies of the Maserati Levante, strapped to their very own underpinnings, to test the super SUV. Various testers have been seen numerous times, even with headlights inspired by the Roma, yet the thick camouflage, combined with Ferrari’s unique way of making their prototypes and mules look like beat-up vehicles, have done a great job at keeping the design a secret.

Unlike Lamborghini, which officially bid farewell to the naturally aspirated V12, the Purosangue is understood to launch with such a sonorous mill. If correct, then it would give Ferrari some very exclusive bragging rights, and yet another advantage over one of its biggest rivals, the Lamborghini Urus, which can trace its roots back to the Bentley Bentayga and Porsche Cayenne, and even to the Audi Q7 and Volkswagen Touareg.

The twelve-cylinder unit might develop around 800 hp and should be joined by a hybridized V8 later on, perhaps with tech shared with the SF90 Stradale. The V6 hybrid powertrain of the 296 GTB might also make its way into the Ferrari SUV, and it is this one that’s believed to have been put to the test in the latest scooped mule, based on the premises that it lacks the typical burble.

We might argue that it didn’t give bystanders tinnitus for the simple fact that it was driven at low speeds, but everything is possible. So, do you think that Ferrari has actually started testing the electrified V6 in the Purosangue? 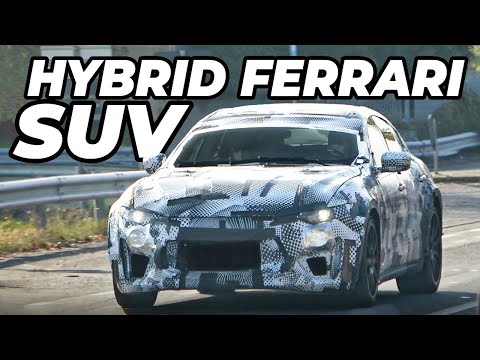