Home > News > Car Profile
2 Nov 2021, 16:59 UTC ·
by Stephen Rivers
It's always interesting to see how other cultures achieve similar goals. When it comes to the Citroen C6 we find that the French automaker prefers its luxury cars to be very eccentric.
6 photos

Let's start by addressing the elephant in the room. The Citroen C6 isn't legal here. Thankfully, this exact car is here under the "Show and Display" exemption. That's because it's owned by the incredible Lane Motor Museum, home to more than 500 interesting cars, most of which run and drive.

That's why Doug has the chance to do more than just look at the C6, he gets to drive it. More on the car first though. Inside the C6, nothing is as one might expect. DeMuro makes that clear just a couple of minutes into the video by showing us the door pocket.

In your car, it's probably just an open slot. Some European cars feature a little flat that you open. In the Citroen C6, about 15 inches on the side of the door card slide DOWN to reveal the storage space.

Then there are the very strange driver's audio controls. No, they're not on the steering wheel. They're on a stalk coming out of the steering column similar to a turn signal switch.

Of course, the exterior is just as weird. Doug breaks down the taillight assembly in great detail. Oddly enough, the vast majority of the housing is just used as a running light.

Then there's the trunk. It's gigantic despite having a very small opening. Then DeMuro points out the active rear spoiler sitting atop the trunk. Despite being just front-wheel drive and never having more than 240ish horsepower, Citroen felt an active wing was vital.

Of course, the drive is where the C6 starts to come into its own. Thanks to a hydropneumatic suspension it soaks up the road unlike anything else.

Doug specifically notes that excellent ability during the drive saying that it's as good as an S-Class. He also points out that it does waft a bit. That's the only drawback he says. Still, the C6 was meant to be as luxurious as Citroen could get. It might be weird, but we're so glad they made it. 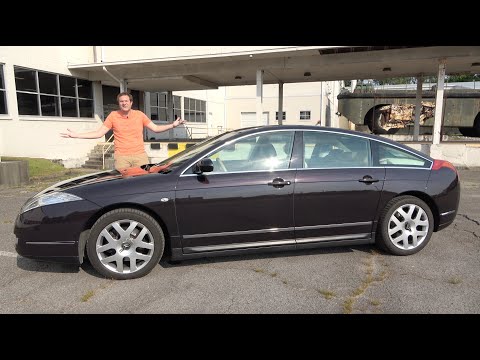