4 Ain’t No Puddle Gonna Stop This Chevy Caprice on 32s, but How Does It Drive?

5 1974 Chevrolet Caprice Donk Is Darker Than Night Itself
Coverstory

Warning! What You See Is Not a Rendering: Loki Basecamp's Icarus Truck Camper Is Now Real

Just when we thought we’ve seen it all, in comes this Dodge Challenger. Arguably one of the flashiest examples out there, it looks like it came straight from the bowels of a unicorn.
10 photos

One might expect to find it on Reddit’s infamous ‘bad’ car mods thread, but they won’t. Not yet, at least, because it has been made famous by an (almost) equally controversial YouTube channel that normally covers such rides. You may remember them from some of our previous stories that included, among others, an Aston Martin DB9 on 26-inch wheels.

So, where should we begin our actual coverage of the car? Should we first mention that eye-catching (not in a good way, obviously) gold wrap that covers almost the entire exterior or should we move straight to the carriage alloys? That is a set of 34-inch Forgiatos, shod in extremely thin rubber, that required a lot of chopping in order to fit under the arches, in addition to some other mechanical upgrades.

Like it or not, we have pretty much covered every brash aspect of the car that otherwise started life as a rather nice Dodge Challenger. That was before its owner decided that it needs to look like the pot of gold that you would expect to find at the end of the rainbow, save for the actual value, of course. And just in case you find it good looking, then you should definitely have your petrolhead license revoked, but at the same time, this is apparently only a preview, so we reckon a longer video is on its way.

After seeing the effervescent Challenger, we suddenly feel the urge to hear the supercharger whine of the Hellcats or, better yet, the SRT Super Stock. If you are like us, then you probably need that too, so you can click on this link and see a comparison between it and the Redeye, after watching the following video, obviously. 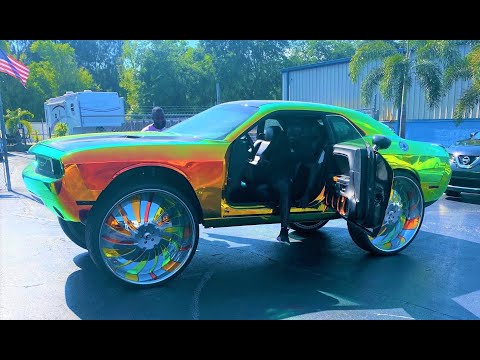