2 Dodge Demon Races Hellcat Redeye, and It’s the Underdog Who Raises All Hell

4 Tesla Model S Plaid Races Dodge Demon, All Hell Could Break Loose After This One

5 European Can't Launch Dodge Demon Properly, Still Gets What It's All About
Space Junk

9-Mile Dodge Demon Is Looking for a New Owner

Introduced for the 2018 model year, the Challenger-based land missile that Dodge calls Demon is a very special muscle car. Only 3,300 units were produced, of which 3,000 were sold in the U.S. and 300 in Canada. Chassis #2541 is arguably the nicest one available to purchase nowadays for it shows a very clean White Knuckle exterior and 9 miles on the clock.
27 photos

Listed on Bring a Trailer with seven days of bidding left, this particular example of the breed left the dealership with a total price of $94,504 including the gas-guzzler tax, destination charge, and a few tasteful extras. The rear seats and trunk carpet, for example, were originally priced at $1 and $1, respectively, while the Comfort Audio Group added $2,495 to the tally. The costliest option came in the form of the $4,995 power sunroof.

Currently going for $120,000 on Bring a Trailer, the Demon still wears the yellow plastic guard on the front bumper. That’s mounted from the factory to protect from scrapes and scuffs during shipping. Currently the head of design at Ram and Mopar, former Dodge and SRT head of design Mark Trostle famously said: “To me, as a designer, it ruins the lines of the car.”

Immediately after being purchased by the original owner, the dealer tinted the windows and mounted 3M door edge guards. Presented with the original window sticker, dealer bill of sale, order form, Demon Crate, and manufacturer’s literature, the strip-slaying coupe still features the Demon-branded Nitto NT05R drag radials from the factory. The 315/40R18 rubber shoes were developed specifically for this application according to Dodge.

When equipped with front runners, the upgraded ECU, and performance air filter included in the Demon Crate, the 2018 Dodge Challenger SRT Demon cranks out 840 horsepower on race fuel, as in 100-plus octane. Opting for 91-octane premium brings the output down to 808 HP, which still is crazy. 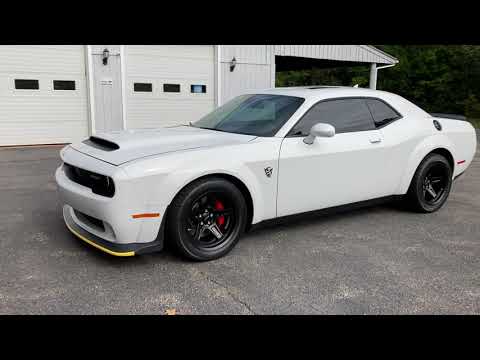