Do you know how classic cars sometimes emerge out of long-term storage with surprises under their hoods? It's usually a larger engine from a different car, but some barn finds also surface with race-spec mills that speak of their drag racing pasts. Well, this 1970 Dodge Challenger still rocks its original powerplant, but it's completely covered in the twigs and sticks of a rat's nest.
6 photos

This pony car was taken off the road back in 1985, after only 15 years in service. And even though this usually happens when the drivetrain goes bust, this Challenger was retired because the headliner was falling down. The owner simply bought a brand-new car and parked the Mopar in a barn. Some 36 years later and the shed looks like it's about to crumble.

Surprisingly enough, the Challenger inside is in far better condition than the barn. Sure, the Go Mango paint has seen better days, but at least there are no rust holes in sight. The chrome trim and the black vinyl top have also survived the test of time quite nicely. And everything on the car is original.

Opening the door reveals a cool Burnt Orange interior, one of the rarer options from the era. And unlike the exterior, the cabin looks like it could get away with just a thorough cleaning. It also features a factory A/C and, more importantly, a three-speed manual transmission.

The latter mates to a slant-six engine, but you won't be able to see much of it as the mill is covered in debris that pack rats carried under the hood to build a nest. There are so many twigs, sticks, and leaves in there that the hood can no longer be shut completely. And I have a feeling that the rats are still living in the engine bay.

There's no word on whether the owner is looking to sell the Challenger, but it seems it's one of many classic cars resting on that property. Hopefully, the owner will let it go at some point and this old Mopar will find a loving home and an owner who will put it back on the road. The pack rats need an eviction notice and they need it soon! 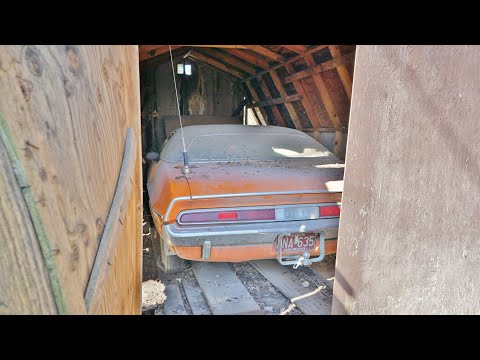