2 77-Year-Old Farmer Has the Biggest Collection of Ford Vintage Tractors in the U.K.

5 Old Ford F-100 Gets First Wash in Decades, Uses John Deere Loader to Do Burnouts
Up Next

It may sound hard to believe, but there was a time when tractors were in such short supply that people used their cars to plow, make hay, and haul logs. It happened in the 1940s when farming equipment was in short supply due to World War II. That's when the doodlebug tractor was born.
6 photos

The doodlebugs of the 1940s were usually based on Ford automobiles from the 1920s and 1930s. The cars were stripped off of most of their body panels, retaining only the hood and cowl radiator. Sometimes they featured a small truck bed and a hitching point for towing. Their interiors were also stripped off to the point that they only had just a small seat and a dashboard.

Doodlebugs went out of fashion once tractor production resumed in the late 1940s, but these contraptions enjoy a cult following in certain parts of the U.S. If you haven't seen a doodlebug yet, here's one getting dragged out of the woods after more than seven decades.

Discovered by YouTube's "Jennings Motor sports," the same guy who revived a GMC truck that's been sitting for 81 years, the Ford-based doodlebug was abandoned in a forest sometime in 1949. This means it's been off the road and exposed to the elements for a whopping 72 years.

With melted tires and wheels so rusty that they can no longer sustain the weight of the tractor, this doodlebug is basically a pile of junk. But Jennings is determined to save it and hauls it back to the shop in hopes that the old engine will fire up.

Based on a Ford Model AA, a truck built from 1927 to 1932, the doodlebug appears to have a four-cylinder under the hood. All Model AAs were fitted with 201-cubic-inch (3.3-liter) four-bangers, so there's a good chance that this tractor still has its original mill under the hood.

Like any engine that has been sitting for decades, this four-pot needs new spark plugs and wires, but, amazingly enough, it's still turning freely. And while most mechanics would render it dead, Jennings actually manages to get it running again. Not only that, but the old four-pot runs surprisingly smooth for a powerplant that's been sitting outside for seven decades.

Sure, with the rear wheels broken off and the rusty transmission stuck in gear, this doodlebug isn't going anywhere for now, but at least it's not spending its retirement in the woods or at the junkyard. Hopefully, it will get a second chance at life with parts from a different Model AA. Meanwhile, check it out flexing its four-cylinder mill in the video below. 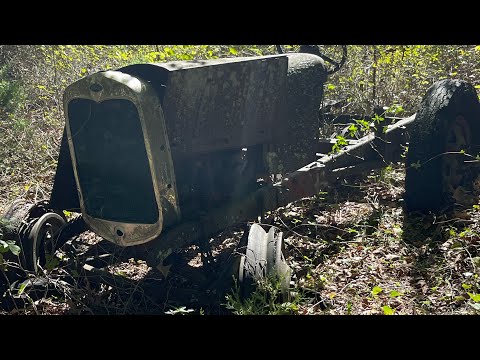